East coast lamb prices tumbled fast and hard this week. With processors booked to capacity, low supply through the yards wasn’t enough to spur on competition between buyers. The demand just wasn’t there.

The Eastern States Trade Lamb Indicator (ESTLI) dropped 81¢ or 9% in the last week. At 786¢/kg cwt, it’s now sitting 14% below the same time last year and 13% over the five-year average (Figure 1). It was a different story in the West, there were no signs of an easing market. The Western Australian Trade Lamb Indicator (WATLI) held steady at 818¢/kg which put trade lambs in the West at a premium to the East for the first time this year.

No category was spared from the falls on the east coast. Heavy lamb prices continued the downward slide, losing another 79¢. This puts Heavy Lambs 27% or 207¢/kg under year ago levels.  It’s little wonder with plenty of heavy lambs hitting the market and no reason to think export demand will pick up significantly. Light lambs were also dragged 84¢ lower and Restocker lambs were down 46¢.

Higher numbers of sheep presented at yards in the week ending the the 26th of June, which explains much of last weeks mutton price movement. 55,591 sheep were yarded on the east coast which is a 37% increase on the week prior (Figure 2). Lamb throughput was largely unchanged, totalling 134,064 in the east. However taking a look at the individual states, a big rise in throughput in SA & Victoria were balanced out by very low throughput in NSW.

Lamb and sheep slaughter continued to track at historically low levels for this time of year. A stark contrast to last season, sheep slaughter was 59% below the same week last year. 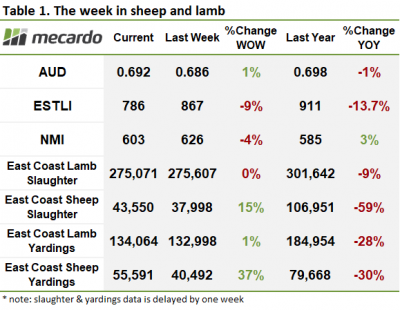 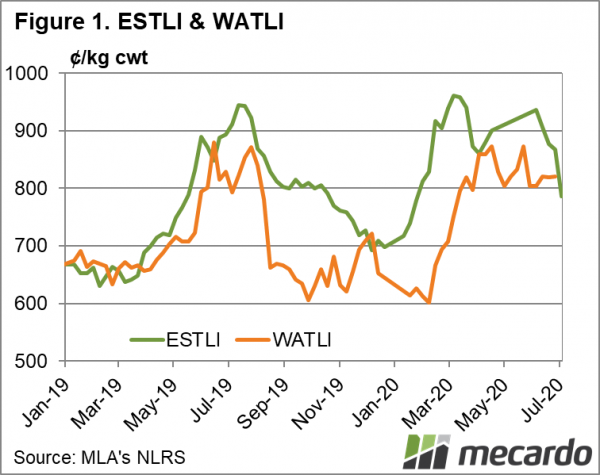 We haven’t seen lamb prices this low in the last 6 months which is likely to attract more buying interest. The AUD at 0.69 US¢ is acting as a headwind to export markets but with this weeks dramatic falls, lambs will still be better buying for overseas customers than they’ve seen in recent months.