The last fortnight in January saw both yarding and slaughter levels post a significant retracement for lamb and sheep markets across the east coast with the tight supply keeping prices well supported.

From its mid-January peak combined weekly lamb and sheep yarding levels along the east coast has shed 37% to test toward 210,000 head. Despite the sizeable drop in sale yard volumes the magnitude of the fall is in line with what would be expected by the five-year trend pattern – Figure 1.

A similar picture emerges for the combined weekly lamb and sheep slaughter numbers, posting a 24% drop from the January peak to finish just below 400,000 at the end of the month. Although the percentage magnitude of the fall in slaughter is smaller than that for yardings, the decline in slaughter sees it testing the lower boundary of the range that would be considered normal for this time in the season – Figure 2.

As the yarding and slaughter data has a week lag there is a chance that supply has remained low as we have headed into February with producers blessed with rainfall given some confidence to hold onto stock. Certainly, the lamb and sheep price movements this week suggest that sales remain tight, but we will have to wait for confirmation when the yarding data is released into next week.

The strong opening in mutton markets for 2020 really standing out when comparing back to 2019 levels for this time in the season. The NMI is a comfortable 61% higher than this week last season and the ESTLI isn’t looking too shabby either, with a 31% premium on it’s 2019 level. Remarkably, the NMI is just 34¢ below where the ESTLI was at this time last year. 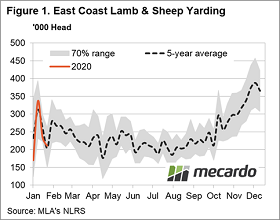 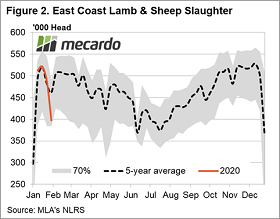 All of the eastern seaboard is expected to get a bit of a drenching in the coming week. While much of the heavier falls are limited to the coastal zones there is still up to 50mm forecast to reach into central NSW and Victoria. An increase to sheep and lamb supply seems unlikely given the prognosis for rain in the short term so prices should continue to be supported into next week.