All the motions were in place for another week of positive prices and boy did it deliver. Fewer lambs in yards, another splash of the wet stuff in the south and news that the East is in store for plenty more as we officially enter a La Niña, on top of easing processing restrictions in Victoria – made for a solid market.

East coast lamb yardings were back 19% for the week ending the 25th of September compared to the bumper throughput of the week prior. Volumes in Victoria held steady, however another good soaking for much of NSW and Eastern SA during the period saw throughput decline.

There was a significant lift in sheep yardings though, with 56,208 yarded on the east coast. In SA there was a 156% increase in sheep throughput compared to the week prior with a total 8,756 head yarded.

Processors kept steady at recent levels with little change to the number of sheep and lambs slaughtered week on week. As Adrian Ladaniwskyj reported on Mecardo earlier in the week (view here), on the 28th of September, Victoria’s processing restrictions were eased to 80% of peak workforce capacity for processors in metropolitan Melbourne and 90% in regional Victoria.  At the new level, there’s unlikely to be any significant disruption to the states ability to process the spring flush of lambs as was previously feared.

Buying activity was strong at the yards this week. The Eastern States Trade Lamb Indicator lifted 66¢ to 799¢/kg cwt; just one cent shy of the same time last year. Western Australia also felt the positive sentiment with Trade Lambs selling 34¢ dearer than the week prior to sit at 627¢/kg cwt.

Merino lambs saw the biggest gains in ¢/kg terms; the eastern Merino lamb indicator rose 83¢ to 769¢/kg cwt. All categories of lamb gained around 50 to 85¢. Export buyers and restockers were again active in NSW, where the biggest gains were made of all the states. The east coast Heavy Lamb Indicator gained 88¢ to 771¢/kg cwt and Restockers lifted 52¢ to 885¢/kg cwt.

The gains in Mutton were just as strong in percentage terms. The National Mutton Indicator ended the week 7% higher at 573¢/kg cwt. 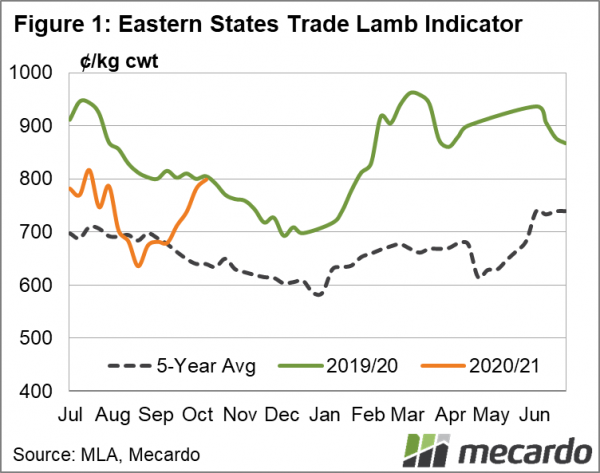 With La Niña underway in the tropical pacific, and the Bureau indicating its likely to be sustained into at least January 2021, there’s plenty of reason to be optimistic about the season. Trade lamb prices are not far off year-ago levels, and the bonus of a good spring/summer rainfall outlook will keep the market in check when Victoria’s spring flush kicks into gear.