Weekly yarding levels continue to contract and processors are responding to higher lamb and sheep prices with reduced slaughter volumes. High prices this early in the season are putting meatworks on notice that the seasonal winter peaks in lamb and sheep prices could reach historic records but the autumn break in the southern regions needs to be in a cooperative mood.

For the first time this season, weekly east coast sheep yarding levels have moved below the five-year average pattern, reflecting the tightening ovine market. Sheep yardings for the week ending 14th February dipped 1% below the seasonal average trend to come in under 86,000 head (Figure 1).

Weekly lamb yarding levels across the east coast dropped nearly 20% through the first two weeks of February. At this level, yardings were 12% below the five-year average seasonal pattern at nearly 160,000 head.

Patrick Hutchinson, CEO of the Australian Meat Industry Council (AMIC), came out earlier in the week expressing his concern over the impact of a livestock drought on processors once the rains arrived and by the looks of the combined lamb and sheep weekly slaughter volumes, meatworks are already starting to feel the pinch. Slaughter volumes across the east coast have been averaging weekly levels 8% under the five-year trend for the past month (Figure 2).

We are not even out of summer yet and the Eastern States Trade Lamb Indicator (ESTLI) is comfortably above $9 a kilo on a carcass weight basis and probing levels we didn’t see until mid-winter in 2019. The National Mutton Indicator (NMI) is hovering around price levels that the ESTLI was fetching at this time last season. Indeed, the NMI closed last week at 663¢/kg cwt, 20¢ higher than where the ESTLI was on the same date in 2019.

The Bureau of Meteorology (BOM) updated their three-month outlook yesterday and it shows for the autumn break that there is a chance for a slightly drier result in western NSW. However, the bulk of the southern regions can expect a 50/50 chance of a wetter or drier outcome (Figure 3). While it isn’t the best result producers can expect, it is a much-improved prospect than they were facing this time last season. 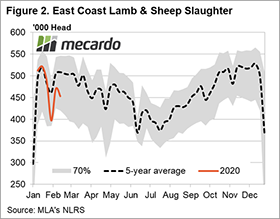 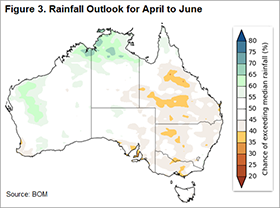 At least over the short-term horizon, the rain is still coming, and with the summer temperatures there is enough warmth to continue to encourage grass growth. The BOM is expecting 5-25 mm of rain to fall across eastern NSW and eastern Victoria in the coming week. Falls of less than 5 mm are expected for parts of western NSW and western Victoria. Unfortunately, SA misses out, but southern WA can expect 10-15mm.

Despite the unlucky SA producers’ prospects for rain this week there should be enough about to keep supply tightening and to provide continued support to lamb and sheep prices into next week. I’m heading to the Weekly Times Coles 2019 Farmer of the Year Awards in Melbourne tonight so any Mecardo subscribers come and say g’day. Good luck to all the contenders.