The week in cattle has been a disappointing one, where prices have tumbled across the board, with restockers and heavy steers hardest hit. Saleyard supply keeps ramping up, with yarding’s steadily increasing, but the latest slaughter numbers showed a reduction which is not typical for this time of year. Overall, the feeling is that there just isn’t sufficient support in the market for the heady prices we have reached recently in the face of increased supply, so a correction was the result.

Yardings added another 8% from the week prior, demonstrating a typical increase in supply as we move into the dryer season of summer. The selling pressure was coming out of QLD, which was up 14% on the prior week, backed up with a 14% increment coming from VIC also, with SA also coming to market in earnest, showing a 28% lift. In contrast, the enthusiasm was not so strong in NSW, which yarded 8% less.

Overall, yardings increased by 3,838 head compared to the week prior, with 54,963 cattle yarded on the east coast for the week ending 20th November; which is 36% below last year’s figures. Given the price falls we have seen this week, and the usual trend of higher supply for this time of year, it is probable that we will see that yardings increased again this week when the official numbers are released.

Much of the solid increase in throughput seen a fortnight ago was given up last week, with slaughter falling 5%, largely driven by a big reduction of 20% in NSW, followed by QLD at 2%, offset by a 10% increase in VIC. Interestingly, SA Slaughter at 3,176 head is 15% below total yardings, indicating that there may be some supply side driven pressure on prices in that state currently, with the SA processor steer indicator reflecting a 2%-5% discount to the other states. Overall, a total of 104,177 cattle were processed for the week ending the 20th November; which is 36% off the pace of last year.

The EYCI just couldn’t keep up the momentum after reaching it’s all time high last week, and shed 14¢ to settle the week at 813¢/kg cwt.

There’s no good news to report across the categories, with red ink universally staining the board this week. Restocker and heavy steers suffered the most, with even the normally resilient feeder prices booking a solid fall.

The Aussie dollar has continued to strengthen against the US, up 1% this week, and now sits at 0.736US. 90CL US frozen cow prices are holding up well against the rising Aussie dollar, and remained relatively stable, only dipping a negligible 1¢ to come to rest at 654¢/kg swt. 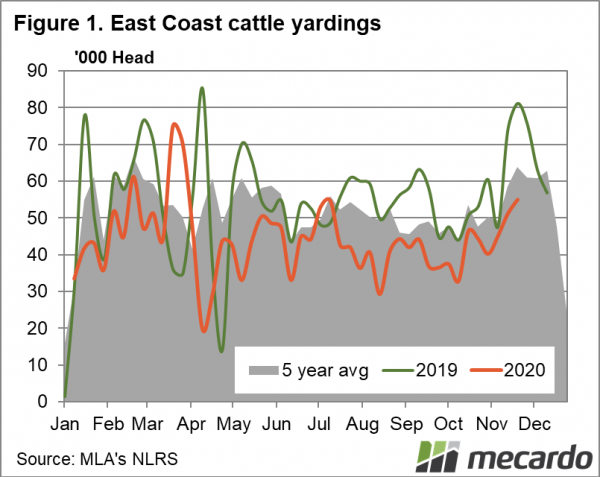 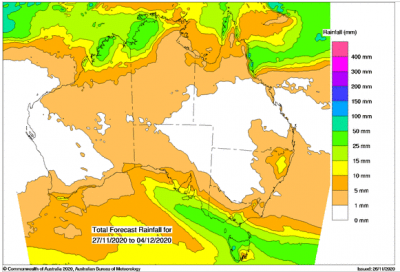 Short term rainfall is looking increasingly leaner as we move into summer, with fewer districts blessed by its gifts over the next week. At this time of year, we can expect that yardings will continue to rise for another week or two before plateauing. Given the softer prices we have seen this week, it is likely that both processor and restocker interest at these heady price levels are not sufficient to support the increased supply, so there may not be much upside in prices on the immediate horizon.