Processors continued to work through another week of strong lamb and sheep supply. The positive news is that prices generally stabilised across most categories of lamb and mutton. While the Eastern States Trade Lamb Indicator was close to pushing under 800₵ it managed to bounce this week.

While yards in NSW and Victoria appeared quiet last week compared to the boom of the week prior, the number of lambs yarded was still well above the seasonal average in all states. Total lamb yardings were 54% above the five-year average for last week. East coast sheep yardings returned to a more normal level, falling 47% on the week prior with the weeks tally just 7% below the seasonal average.

In the West, lamb yardings increased 93% on the week prior, and were 78% higher than the 5-year seasonal average. Sheep throughput in the state also jumped by over 10,000 head, to see 20,866 sheep yarded.

Prices were a mixed bag of improvements and corrections between states and lamb categories. In NSW, demand was generally firmer, for all except restocker lambs which lost 37¢ on the week. Victoria saw minor movements in price. The Restocker Lamb Indicator in Victoria is now the only indicator in the state to sit higher than the same time last year (+13¢).

Nationally, the Heavy Lamb Indicator gained 3¢ to 777¢/kg cwt which is 10% or 84¢ below the same time last year. Mutton rebounded in NSW which helped push the National Mutton Indicator up 17¢ to 647¢/kg. 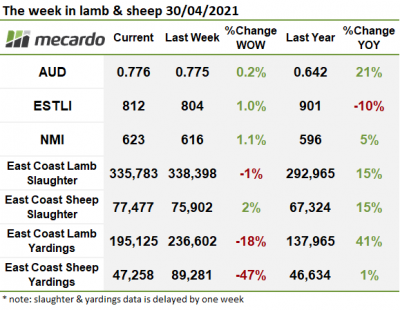 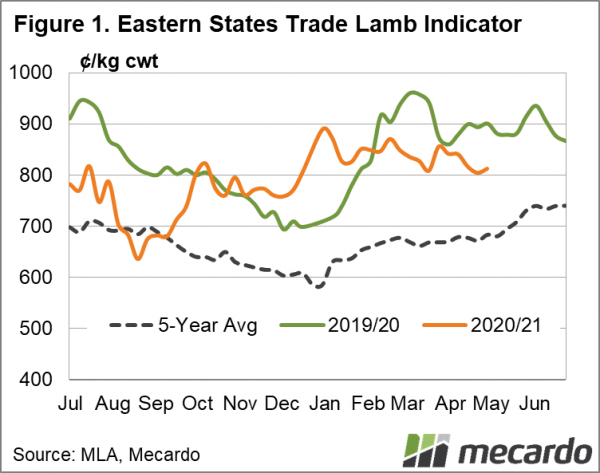 As reported in this week’s lamb and sheep analysis, for the rest of the year slaughter rates are expected to increase on last year’s levels. It’s a good sign that prices are holding relatively well despite the relatively strong supply of recent weeks.