Undesirable export trade news wasn’t enough to disturb this week’s market. Prices were firm for heavy, light and trade lambs, even with an added supply boost from Victoria.

Increased throughput from Victoria’s flush isn’t having the typical impact on prices. In fact, all categories of lamb in Victoria ended the week with price improvements. Lamb yardings in VIC swelled to 119,268 head in the week ending the 27th of November, which is close to the five-year average for this time in the season.

Total east coast lamb throughput lifted 5% week on week, despite fewer numbers in all states bar VIC. If we look at the month of November, lamb yardings were 9% higher than November 2019, but 2% lower than the five-year average. Lamb slaughter paints a different picture and helps explain some of the price strength. Total eastern lamb slaughter for November was 2.5% lower than in 2019, and 10% lower than the five-year average.

In the West, the Western Australian Trade Lamb Indicator gained 12¢ on last week to see it move to 674¢/kg cwt.

A lift in supply of sheep last week was enough to put some pressure on mutton prices. The National Mutton Indicator fell 19¢ to 616¢/kg cwt. 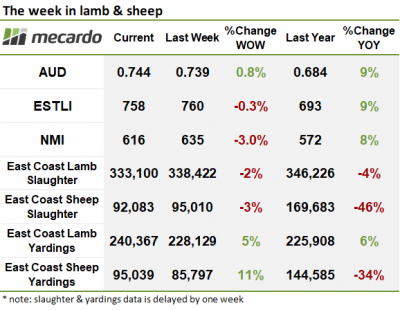 The next fortnight has some pretty good rainfall forecast for much of the country, with over 50mm on the radar for a broad area of the north east. Total spring lamb supply has been strong, but any remaining stock might be encouraged to hold a little longer.