Home > Market analysis > Steady as she goes, and Panic in the US.

After a history making week last week, where the EYCI reached record heights, the market was more relaxed this week, with only a minor slide booked in the EYCI, while gains were booked in both processor steers and medium cows. Ballarat PTIC females hit $3,700 /head today, highlighting that restocking and replacement is still high on producers’ minds. The gains in 90CL recently have been driven by low supply to the US from Australia, and panic buying as a result.

Yardings collapsed last week, dropping 38% overall, with cattle thin on the ground in NSW and VIC, whose numbers both plunged 39% and 65%, respectively. At only 3,485 head, VIC yardings have not been lower for this time of year in a decade, with NSW setting a similar record low.

With plenty of grass in the paddock, and a low herd, and the resulting limited supply of cattle probably dictating relatively conservative stocking rates for many producers. As a result, it is unlikely that anyone is in a hurry to sell, especially with prices on an upward trajectory lately, so low yardings is a symptom of the unprecedent times this season.

In contrast, slaughter rose 7% compared to the prior week, lead by a strong 29% increment in VIC throughput, and 18% gain in QLD, offset by a 19% reduction in NSW, which wiped out all of the increase booked in VIC.

After the excitement of reaching another heady record last week, the EYCI relaxed somewhat, falling back 6¢ (1%) to finish the week at 882¢/kg cwt.

The categories this week, on the whole, had more winners than losers on the sheet, with medium cows the star performer, while medium steers slid backwards, and restockers inched lower. Vealers bounded up strongly again, surpassing the heights seen back in November. Medium steers backtracked 11¢ (3%) to 398¢/kg lwt, but in contrast, medium cows advanced a healthy 8¢ (3%) to reach 289¢/kg lwt. Feeder and processor steers inched upwards, gaining 4¢ (<1%) and 7¢ (2%) to respectively close the week at 459¢/kg lwt and 440¢/kg lwt. Heavy steers followed suit, crawling up 4¢ (1%) to close the week at 377¢/kg lwt.  Restockers continued to come off the boiling point reached a fortnight ago, gliding down 4¢ (<1%) for the week to finish up at 547¢/kg lwt, and vealers bounded upward 18¢ (4%) to 469¢/kg lwt.

The Aussie dollar fell back again this week by 0.6% to 0.760US, with the US dollar strengthening to a two-month high on the back of positive news where jobless claims continued to fall, indicating a strengthening economy.

90CL rose again, by 17¢ (3%) to reach AUD 657¢/kg swt, again off both the strength of the US dollar and a native rise in its’ price in US dollars. The rise in recent weeks has been spurred on by Australia’s low slaughter numbers putting a squeeze on imported supply into the US. This has been compounded by alternative sources such as NZ not filling the shortfall, and some corporate beef customers not being willing to substitute for south American product, particularly from Nicaragua after the “conflict beef” scandals that came to light last year. However, appetite to change procurement policies is rising due to the headwinds of higher prices and panic buying as inventories of compliant product fall. 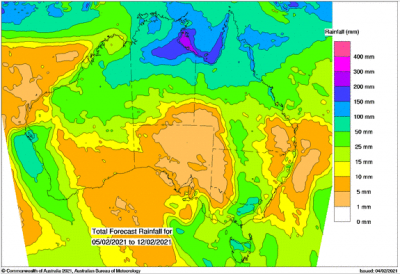 The BOM’s forecast has more rain incoming from north to south, so southern pastures are set to get cop yet another watering down in existing standing feed quality, but consolidate the strength of any new growth coming through, topping up moisture levels in the soils. Eyewatering prices  for PTIC females were set today in Ballarat, indicating that the restocker market still has a lot of strength in it, and there may be strong confidence out there in how long prices will hold at present levels.