This week saw a solid recovery in prices, as we head towards the end of the year, most likely driven by the steep decline in yardings. The EYCI saw a healthy 3% rise, but rampant demand and limited supply have resulted in a huge surge in prices paid by restockers in northern QLD, while heavy steers recovered after almost a month of decline.

Yardings dropped like a stone last week, plunging 16% with the reduction driven primarily by QLD, which pegged a 22% drop, followed by VIC, which fell 16%, while NSW followed the trend with a 10% decline. Overall, yardings fell by 6,974  head compared to the week prior, with 37,435 cattle yarded on the east coast for the week ending 11th December; which is 38% below last years figures.

Slaughter slackened off by 2%, with the reduction lead by QLD, which booked a 4% decline, followed by NSW, which backed off 5%.  Overall, a total of 112,229 cattle were processed on the east coast for the week ending the 1th December; which is 32% off the pace of last year.

The EYCI built on the stability it achieved last week, to lock in a solid rise of 22¢ (3%) to reach 814¢/kg cwt. On the categories, restocker steers skyrocketed, building on strong gains made last week, and heavy steers mounted a solid recovery from a six week downward spiral.

Intense enthusiasm for restocker steers saw a massive 33¢ (7%) leap in prices to finish the week at 519¢/kg lwt. At present, Northern QLD is driving the buoyant prices for restocker steers, booking both the largest gains this week, and also trading at the highest levels in the country, at a 48¢ premium to NSW, and 152¢ above VIC pricing. Restocker steers have now gained 11% over the last fortnight.

Heavy steers pulled out of their losing streak, gaining 15¢(5%) this week to close the week at 351¢/kg lwt.  Feeder and Processor steers tracked along in a fairly sideways manner, to respectively finish up at 416¢/kg lwt and 406¢/kg lwt.

Medium cows continued on their now seven week straight declining path, dropping another 7¢ (3%) to come to rest at 259¢/kg lwt. Interestingly this weeks fall in the national price appears to have been driven by WA, which records the lowest prices in the country, at 4% below the national indicator. This week, WA was the only state to record a fall in price, with VIC prices advancing 15¢.

The Aussie rose again against the greenback, pushing up another 1.2% to reach 0.762US. The rise was again lead by continued weakness in the US, as jobless claims data continue to tell a dire story, but this is tempered by encouraging signs that agreement on a renewed round of fiscal stimulus is becoming tantalisingly close.

Last week’s US 90CL frozen cow prices were steady in $US terms, but suffered from the rise in strength in the Aussie dollar, dropping 5¢ to last 642¢/kg swt. With another solid rise in the dollar seen this week, we can expect more weakness in 90CL unless we see a decent rise in underlying prices in the US. 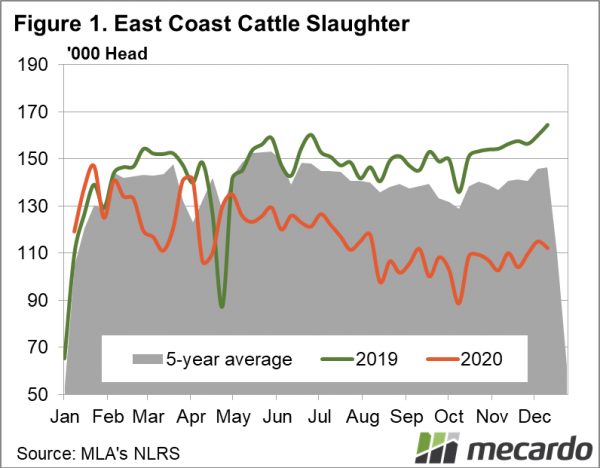 An early Christmas present looks like it will be delivered to QLD in spades next week, with a massive 50-100mm dump right across the state forecast, extending down to Northern NSW, though VIC is likely to only receive a few meagre morsels in comparison. Rains finally coming to QLD and NSW will boost producer confidence, so we can expect that yardings will fall again next week, while slaughter is not expected to dip much over the period, so we might see some stronger pricing coming through as a result.