Whilst those in charge of mowing lawns aren’t happy with this continuous rain – producers with mouths to feed are very happy with the conditions, and it’s showing in the prices paid for cattle in saleyards and online. AuctionsPlus reported “competition is again anticipated to be fierce” in today’s sales (Friday 3rd December, 2021), with a “34% weekly increase in auction participants” last week on their platform, evidence of the strong demand coming from producers at the moment.

Taking a look at the top saleyards contributing to the Eastern States Young Cattle Indicator (EYCI), again it was the Roma store sales contributing the most head of cattle (17%) and at the highest average price too, at 1192¢/kg cwt.  Dubbo and Wagga were the next highest contributors at 13 & 11% respectively and average cattle prices were 1082¢/kg cwt in Dubbo and 1101¢/kg cwt in Wagga.

With grass fever running high and not looking like slowing down in the near to medium term, low yardings & slaughter levels continue to be the norm – keeping upward pressure on prices. Cattle yardings were up 6% for the week ending 26th of November on the week prior, with 41,136 head yarded. This is still 34% below this time last year and 20,000 head below the 5 year average for the same week . 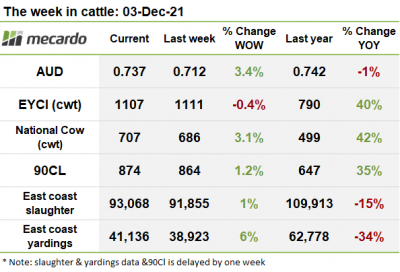 With only a few more weeks to Christmas and subsequent slowdown in yardings and processing, and plenty of green grass about, it’s hard to see a big uptake in cattle numbers heading to the saleyards or for processing. We can expect prices to remain firm as demand looks to remain strong locally and also internationally.