It was a week of wins for those that sent lambs and sheep to the saleyard. While no records were made and so we won’t break out the Coach Boxell celebration yet, prices improved across all types of lamb and sheep and the market is sitting well above the same time last year.

The Eastern States Trade Lamb Indicator (ESTLI) came off the block strongly, improving 14ȼ on the week to see the ESTLI at 924ȼ/kg cwt. This is 135ȼ or 17% higher than the same time last year. In the West, trade lambs picked up an additional 54ȼ to 766ȼ/kg cwt. After a month of significant rainfall, many parts of the West are looking in very good condition, even “too wet” in some southern areas (if we can be so bold to say).

Restockers really led the charge higher in this weeks market and came out with the biggest week on week improvement. The National Restocker Indicator lifted 102ȼ to 935ȼ/kg cwt, where it sits 176ȼ or 23% higher than the same time last year. NSW was the main driver of restocker price improvements, in direct contrast to Victoria, where the store lamb market softened. National Merino, Heavy and Light lamb Indicators all ended the week 25-45ȼ higher.

Heavy lambs are at about a 30ȼ premium to trade lambs in both Victoria and NSW. The National Indicator is currently 240ȼ or 34% higher than the same time last year, when we saw heavy lamb prices fall very quickly. This time around, those that have been able to put the extra weight on lambs are being well rewarded.

172,021 head of lambs were yarded in the east for the week ending the 23rd of July. This was 8% fewer than the week prior but still 5% above the five-year seasonal average. Most of the decline came from NSW where yardings slipped back to 124,930 head. In WA just under 10,000 head of lambs were yarded. Sheep yardings dropped dramatically in the east last week while increasing in WA. East coast sheep throughput for the week was 19% below the five-year average.

Slaughter continues to track at a seasonally strong pace. 303,910 lambs and 79,030 sheep were processed in the east last week, which combined was 3% higher than the five-year average for this week. 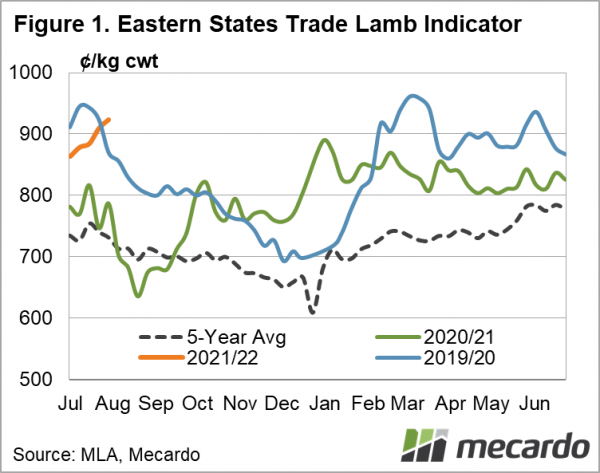 As we mentioned in this weeks lamb analysis, given the wet July, the strong slaughter and yardings were unexpected, but prices at current levels are incentivizing lambs to sale. They are likely to fall from here as NSW supply picks up, but the rain received to date and current forecast should support the price outlook.