It’s not only Melbournians that have been released outside the front gate, last week Victorian saleyard throughput figures saw a jump in the number of lambs yarded as the spring flush builds momentum.

Over 200,000 lambs were yarded in the east coast last week. With that being a 56% jump on the week before, it’s no surprise there was so much pressure on price last week. Victoria saw the largest total yardings since June, but with 51,614 head yarded, this was still 32% lower than the same time last year.

310,618 lambs were processed last week which was a 13.5% jump on the week before. Victoria saw an extra 28,991 lambs head to the meatworks compared to the week prior. Slaughter hasn’t really lifted any higher than the winter lows as yet. We saw a similar situation play out in 2011, where weekly lamb slaughter largely held steady through to Christmas, but we have more lambs to come this year.

In NSW prices fell across all categories of lamb. Restockers were the hardest hit, dropping 51¢, but they remain the most expensive lambs in the country. Good quality new season lambs in Victoria were met with firm competition. Trade lambs gained 24¢ and restockers lifted 10¢ while merino lambs lost 32¢. 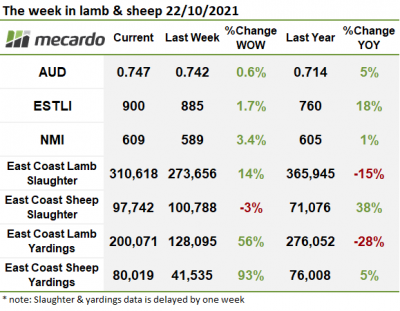 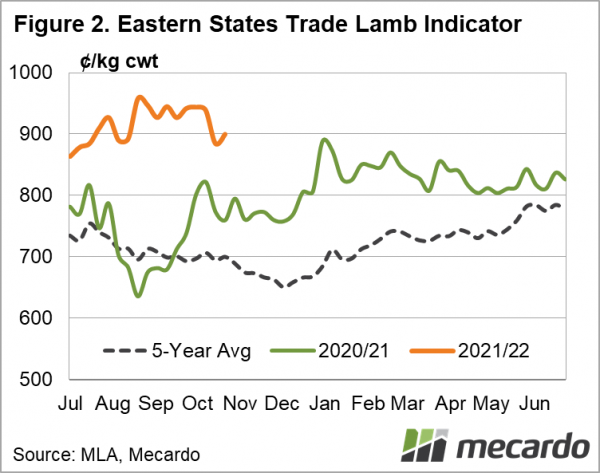 The lift in prices this week and more widespread rain on the forecast is positive. We will watch for next week’s supply figures but it hints that producers will be willing to slow turnoff to support firmer prices in the short term.