It is the time of year when lamb yardings reach their seasonal high, driven largely by Victoria. It was Sheep that reached a record last week however. This is no surprise given the very good prices at a time of year when they usually hit their lows.

East coast sheep yardings reached a new record last week, but only just.  There were 139,490 head of sheep yarded last week (figure 1).  This was only 321 head more than five weeks ago, but it’s a number which hasn’t been seen in at least 12 years.

Strong sheep yardings are being somewhat offset by weaker than normal lamb yardings.  Figure 2 shows lamb yardings were 14% below the same week last year, but in reality it depends a bit on how you match your weeks up.  It looks like lamb yardings might be a week behind last year, but we should know if we have seen ‘normal’ supply by the end of next week.

Trade and Heavy Lambs found a bit of strength this week, the Eastern States Trade Lamb Indicator (ESTLI) bouncing off 700¢ (figure 3).  The spread between NSW and Victoria still stands at around 40¢, while WA prices fell back under 700¢ after four consecutive weeks of rises.

The heavy mutton supply has seen buyers able to pull prices back slightly.  The east coast Mutton Indicator fell 13¢ to 568¢/kg cwt.  Opposite to lamb, mutton in NSW is cheaper than Victoria.  This is probably a quality issue. 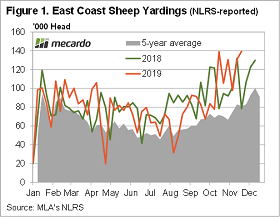 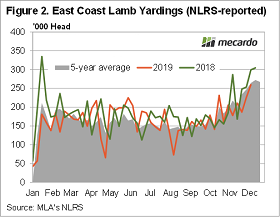 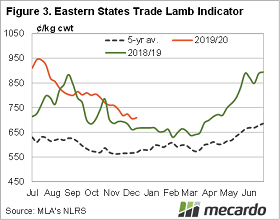 With no rain on the forecast as we come in to Christmas, expect some big yardings next week.  What it does to prices will depend on how many sheep and lambs are booked up for the work days in the break, but recent contracts would suggest processors won’t be scrambling for supply.  The last week might this time see the lowest lamb price since April.