While the the two biggest sheep & lamb producing states continue to battle covid and the threat of processor capacity reductions it poses, or worse still, shut downs, on top off the logistical issues associated with essential worker permits for essential agricultural workers & state border closures, it wasn’t surprising that slaughter levels dropped for both sheep and lamb, with yardings also dropping last week, on 20/08/2021.

While the the two biggest sheep & lamb producing states continue to battle covid and the threat of processor capacity reductions it poses, or worse still, shut downs, on top off the logistical issues associated with essential worker permits for essential agricultural workers & state border closures – it wasn’t surprising that slaughter levels dropped for both sheep and lamb, with yardings also dropping last week, on the week ending 20/08/2021.

We thank all those out there continuing to work and contribute to the different communities, despite the multitude of issues the pandemic is causing – we hope everyone stays safe during this difficult time. On the good news front for those farmers lucky to be selling sheep & lambs, prices continue to do well, with the National Trade Lamb indicator joining the ‘record-breaking’ party this week. It’s looking like a close contender to reaching the 1000 cent mark soon, much like Eastern States Young Cattle Indicator has done recently over in the other paddocks.

The Eastern States Trade Lamb indicator continues to hold at positive seller levels too. Although it finished this week down 11ȼ at 946ȼ/kg cwt, this is still historical very high. The ESTLI is currently 277ȼ  or 40% higher than this time last year. In US dollar terms this is 687ȼ/kg cwt.

In the National Indicator categories, Light, Merino & Restocker Lambs were all up, with Light lambs leading the charge, up 43ȼ on this time last week. The Merino indicator rose 2ȼ & Restocker’s by 26ȼ on the week prior.

National Trade & Heavy Lambs fell however, 16 & 15ȼ a piece respectively, while Mutton stayed put at last weeks price of 675ȼ/kg cwt, which is 26% higher than this time last year.

Despite finishing the week lower than last week, the National Indicator did hit an all time record level during the week, reaching 951ȼ/kg cwt on Monday, before settling at 930ȼ as of yesterday’s Meat & Livestock Australia’s comprehensive indicators report, a ‘30% lift’ in 12 months. (figure 1)

MLA reported the driving factors behind the record lamb prices during the week were a ‘soft A$ and surging international demand’.

Over to Western Australia and their Trade Lamb indicator picked up 21ȼ on the week prior to settle at 744ȼ/kg cwt, 126ȼ or 20% than this time last year.

All indictors performed strongly in South Australia, rising up between 12 to 79ȼ, bar Restocker Lambs – no price was quoted there for yesterday, but they’re sitting high like most Restocker’s at the moment, at 1,116ȼ/kg cwt. There wasn’t much action in Tasmania, with just 378 sheep yarded there and 521 Lambs, there were little price movements recorded there either, Heavy Lambs did well, but Trade Lambs & Mutton both fell on the week prior.

In WA, Restocker Lambs actually fell however  413ȼ/kg cwt which is a big contrast to what’s happening in the eastern states. It’s 217ȼ down on last week & 208ȼ lower than this time last year. Heavy lambs fell 8ȼ there too, to 763ȼ/kg cwt, while the other indicators in the West lifted between 4 & 26ȼ. There were 7,549 sheep yarded in WA and 6,433 lambs.

Last weeks price rally hinted at a week of very tight supply and with the official figures now in and numbers were down, it wasn’t as significant we might have expected. East coast lamb throughput was 3% lower than the week prior, with 151,646 head yarded. NSW was the only state to see yardings fairly steady week on week. However, east coast sheep throughput was 22% lower compared to the week prior. 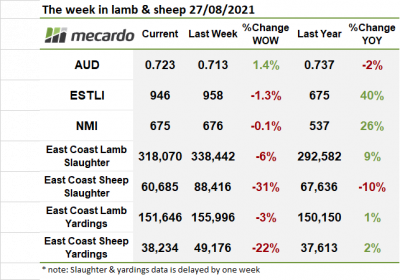 With more record prices recorded again this week and international demand signals looking strong, there’s no question that prices will continue to perform well, everything else being equal – of course we know that is not the case at the moment everywhere.

One of the big questions is, whether processors can keep up with the the spring supply increase, with ‘covid’ related issues constantly lurking as a threat to disrupting processing plants ability to keep up. Hopefully the overall good seasonal conditions will keep on allowing farmers to continue to keep their sheep and lambs on the paddocks a little longer, and maybe spreading out supply more evenly throughout the rest of the year to help processors cope with potential covid related issues.