With not all processors operating fully and sheep supply tight, sheep slaughter dropped to the lowest level of the season last week. It’s been a while since we last had sheep slaughter this low, In fact, the last time was back in 2011. Luckily prices are more robust now, but the reduced buying interest saw modest falls for mutton.

Just 37,998 sheep were processed in the week ending the 19th of June (Figure 1). While it was 53% under the five year average for this time of year, we know it’s far from an average season.  What does make the better comparison is the 2011 season, where the same week saw just a 3% difference in sheep slaughter levels.

There was enough room for lambs to be processed though. Lamb slaughter held steady at recent levels with most yards reporting a slight lift in lamb supply, particularly heavier lambs.

Victoria, Tasmania and parts of Western Australia all received a good drenching in the week passed, and all saw mutton values dive. The result was a fall of nearly 50¢ for the National Mutton Indicator to 626¢/kg cwt (Figure 2).

There were mixed reports for lamb categories between yards this week, but most moved slightly lower. The Eastern States Trade Lamb Indicator (ESLTI) lost 7¢ on the last week of the 2019/20 sale season to finish at 870¢/kg cwt, just 3% below last years level.

Heavy lambs had a noteable fall of 12¢ to 827¢/kg cwt on the east coast, tested by another week of uncertainty around retail and export demand. A 31¢ decline was recorded for Restocker lambs. Merino lambs were the only category to see a gain on the week, up 14 cents to 804¢/kg cwt. 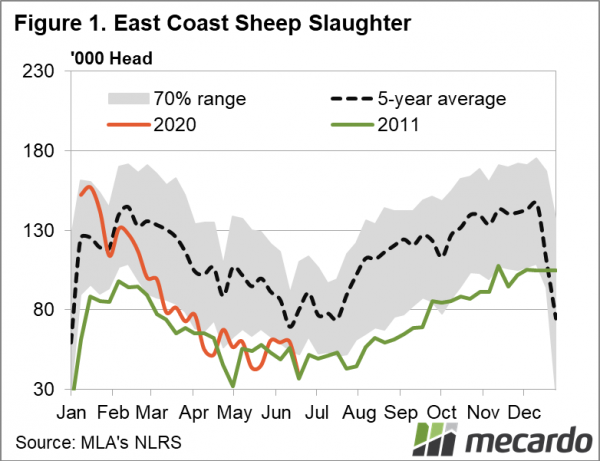 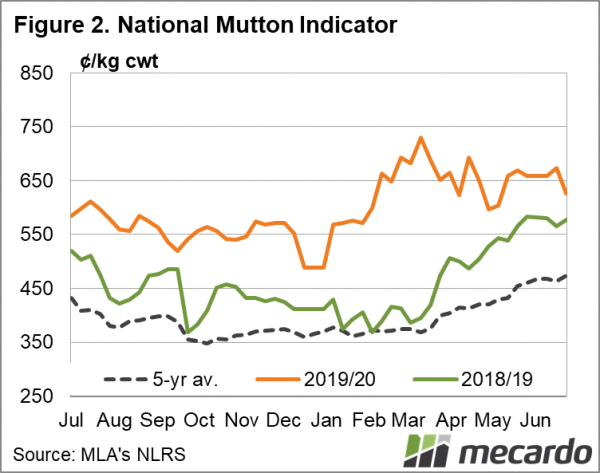 Earlier in the week we looked at how lamb and sheep supply is likely to play as we move closer to spring, and how prices might react (view here). Lamb supplies tend to stay relatively steady at this time of year but rebuilding efforts will keep sheep in paddocks and provide some support to both mutton and lamb prices.