Both price and supply of lambs appear to have found some stability. Saleyard throughput has been tracking at close to average levels for the last four weeks now and slaughter is much the same. After a run lower in April, in recent weeks lamb prices have largely tracked sideways.

The market in NSW was slightly weaker with all heavy, light and trade lambs making minor adjustments and Merino and Restocker lambs losing about 10ȼ on the week. Further south the energy at yards translated to a stronger market, with the Victorian Heavy Lamb Indicator gaining 39ȼ on the week to 807ȼ/kg cwt. Trade lambs picked up an extra 14ȼ on the week, however restockers were out of favour, losing 33ȼ to end at 855ȼ/kg cwt. At this level, Victorian restocker lambs are 53ȼ cheaper than in NSW, but just 5ȼ under the year-ago price.

For the week ending the 7th of May 2021, lamb yardings picked up 7% in the east coast to see 187,240 lambs yarded. Throughput was fairly static in most states compared to the week prior, except in South Australia, where the number of lambs yarded jumped from 6,570 to 20,668. There was a 27% drop in mutton yardings on the east coast last week, driven by a 10,000 head decline in NSW.

This time last year, total Australian lamb yardings averaged 140,000 per week until the end of August. This was unseasonly low compared to recent years, most likely due to the impact of covid-19. The previous 5 years before that, from 2015 – 2019, saw 160,000 lambs yarded per week on average, from the end of May until the end of August. The past four weeks of 2021 have averaged 215,000 lambs yarded per week. Even if lamb yardings start to drop off more we can expect them to continue to be higher or stay similar to the average amount for the last 6 years, bar 2020.

Although mutton yardings dropped significantly from last week to the week prior, they are historically quite strong still. For the past four weeks total mutton yardings in Australia have averaged 74,000 per week, which is just above the average yardings per week of 68,000 per week since 2015 for the same 4 weeks.

While yardings were down overall, slaughter was up. The number of lambs processed last week lifted 6% on the week prior, with slaughter ramping up in NSW and South Australia. Considering lamb slaughter last week was 22% higher than the same time last year, current price levels look very strong, despite being down on last year. 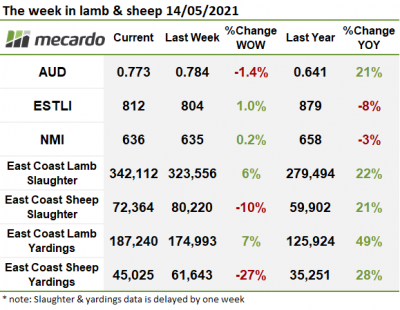 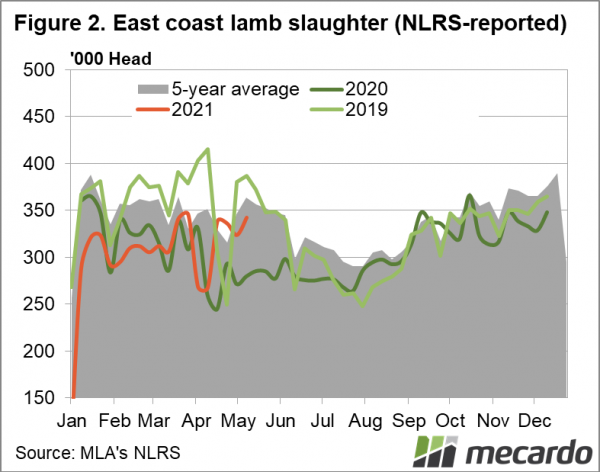 With current reasonably high yardings  and average slaughter levels, even if we see a drop off for both lamb and mutton as we normally do heading into winter, we can still expect yardings and possibly slaughter figures to remain strong for the next few weeks at least.