Lamb prices have been moving within a fairly narrow band over the recent weeks, suggesting that sellers and buyers are content with the market. Restockers were willing to pay a bit more for lambs this week. This wasn’t the case for processors in the east however, as trade and heavy lamb prices fell marginally.

Last week’s price lift did appear to bring a few more lambs to yards, with east coast numbers lifting 7% to 189,010 head. The larger showing was split evenly between saleyards in Victoria and NSW and brought the weeks tally to just 1% under the five-year seasonal average.

Slaughter of both lambs and sheep increased slightly on the week prior but remained below average levels. Volumes processed in NSW have been above average since the start of the year, however both Victoria and SA have been dragging the chain.

A closer look at price movements within the state categories shows lamb is a bit mixed. In NSW and Victoria heavy and trade lamb prices ended weaker. Heavy lambs in Victoria lost 33¢ to 827¢ and in NSW lost 31¢ to 851¢/kg cwt. On the other hand, the SA market had a very strong week, with strong price rises across all categories. Of note, the National Restocker Lamb indicator gained 6% or 57¢ to 973¢, placing the indicator just 17¢ behind the same time last year.

For those with sheep to turn off, the mutton market remains strong with the NMI at 631¢ and just 5% shy of year ago levels. While prices are good for sellers, overseas buyers must be balking at the current levels in USD terms. 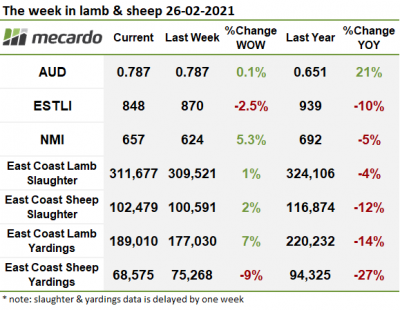 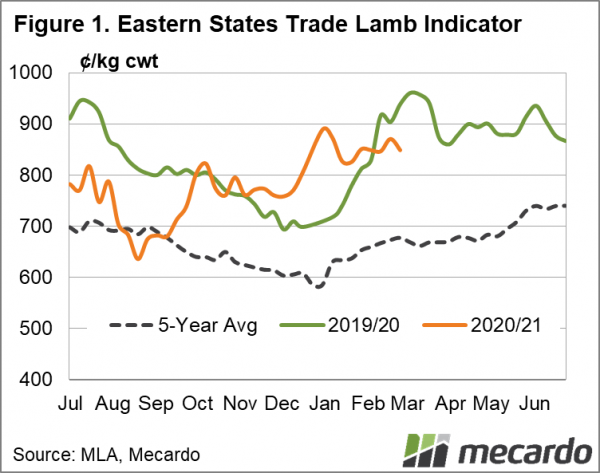 With the AUD hitting a three year high earlier in the week, our lamb and especially mutton are at their most expensive in USD terms. We all know that’s not good for our export markets, and the impact will be something to look closely for in the February export data when its released next week. But for now, given the tight season and rainfall outlook, producers are likely to hold back if prices ease too far.