It has been a week since Meat & Livestock Australia’s (MLA) Officer’s returned to saleyards, and now have and Eastern Young Cattle Indicator (EYCI) for the first time in 9 weeks. It remains volatile however, opening high and losing 10¢ in a couple of days.

The EYCI opened up at 756¢ earlier in the week, easing a little by yesterday to close its first week back at 746¢/kg cwt.  There should be no complaints from sellers, with the EYCI currently 50% higher than this time last year.

Buyers on the other hand, are paying through the nose. Over the hooks quotes for finished cattle were higher this week, around 600¢/kg cwt. The EYCI/finished spread only gets this wide when restockers are on a rampage.

Strong prices are drawing some more cattle out.  East Coast slaughter has rallied for the second week in a row. Last week cattle slaughter was up 3% (Figure 2), but it is down 18.5% on the same week last year.

On average, cattle slaughter peaks at this time of year, and processors would be concerned if we are in for a gradual decline in slaughter supplies from here.

The rising Australian dollar is not great for cattle prices, but for last week at least, increasing US 90CL export prices outstripped the currency increase. Figure 3 shows the bounce in the 90CL continues, pushing up to 816¢ in our terms. 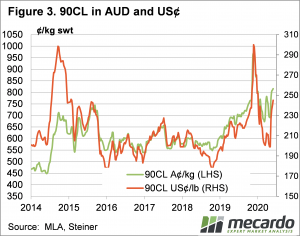 This week’s pause in the price rise might signal a peak for now.  Supply will be tight, but there remains some risk of lower prices for those carrying cattle through the winter. If the rain continues to come, it is hard to see prices falling too far until finished cattle start flowing off grass.