Home > Market analysis > Heavy steers lift off like a rocket

Another week, another record. The Eastern Young Cattle Indicator notched up a new all-time high, but the more notable news this week was a huge 10% surge in heavy steer prices, which reached an unprecedented 476¢/kg lwt, with restocker steers following the trend, also up 6%.

Slaughter and yardings numbers moved in opposite directions last week, with slaughter dipping 6%, and yardings increasing 7% in contrast.

Slaughter decreased across all states, but the reduction was primarily led by an 18% fall in Victoria, followed up by declines of 6% and 3% in NSW and QLD respectively.

The increase in yardings all came from QLD, where numbers surged 42% on the prior week to 24,488 head, offset by falls in VIC and NSW of 17% and 15% respectively.

90CL frozen cow prices strengthened 5¢(<1%) to 822¢/kg swt, again supported by the depreciation in the Australian dollar, however, this was offset by underlying US prices slipping back 1¢ to 270¢/lb. Steiner reports that the softer pricing for imported beef, including from Australia was caused by US domestic beef prices tracking lower, with demand weakening, though not to an extent which is unusual given the time of the year.

The Aussie dollar fell another 0.4% against the US greenback to 0.723US, with the US dollar benefiting from increasing bond interest rates. A recent recovery in iron ore prices late this week may provide support to the aussie into next week. 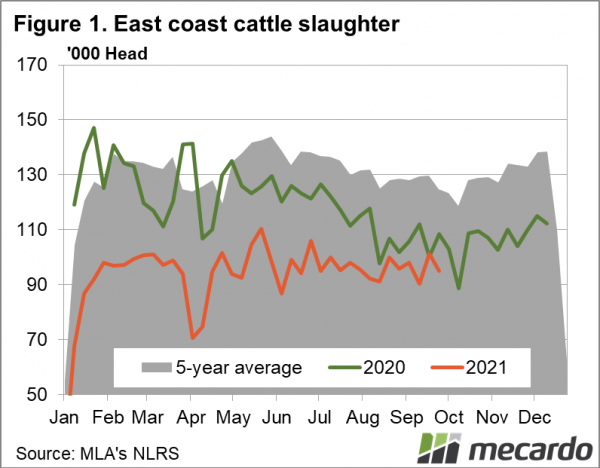 We have seen significant single week changes in heavy cattle prices before, and often, these are followed by a correction, so some weakness next week wouldn’t come as a surprise as the market consolidates. Overall though, heavy cattle prices lifting sharply is a strong sign that the export demand fundamentals reinforcing elevated young cattle prices are well supported, which will provide confidence to the market in general.