A mixed result on the markets this week, with the Eastern Young Cattle Indicator (EYCI) falling back under the 1,000ȼ/kg mark, led by the key central QLD selling centres. Meanwhile Vealers surged forward but heavy cattle notched up a third consecutive week of falls. Supply continues to fall, roughly in line with the historical trend that can be seen till almost November.

As expected, yardings continued to decline last week, dropping back another 3%, with the drop in numbers being driven by a 14% fall in NSW, partially offset by a 18% lift in VIC numbers. Yardings have now slipped 6% since the end of July. A total of 38,620 head were yarded on the east coast for the week ending 27th of August, 2021, down 1,026 head from the week prior.

Slaughter dropped 4% last week, giving back almost half of the big upshift seen the week prior. All the key states posted declines in throughput, led by a 6% fall in QLD, followed by VIC and NSW which suffered a 3% and 2% respective fall. Overall, 95,716 head of cattle were slaughtered in the week ending 27th August 2021, which was down 4,346  head on the week prior.

The EYCI dropped back 31¢ (3%) this week, to 997¢/kg cwt, on the back of an average 15% higher supply of eligible cattle. At the major selling centres, Roma Store prices fell heavily, shedding 105¢/kg cwt to settle at 944¢/kg cwt off the back of higher heifer numbers and a solid fall in steer prices. Dalby prices downshifted 20¢ to 983¢/kg, where Heifer prices lifted, and Steers fell, but Wagga prices lifted 19¢ to 1073¢/kg cwt, helped along by rises in both heifer and steer prices. More generally, central to western QLD prices suffered this week, however, further towards the coast, northern NSW and VIC selling centres notched up higher prices. For example, Moss Vale prices jumped 95¢ (10%) to 1,083¢/kg cwt, while Pakenham also lifted 87¢ (10%), and Inverell crawled up 14¢(2%).

Heavy steer prices have now declined for three weeks in a row, for a sum total of 29¢ (7%), while in contrast, Restocker prices have risen 3% over the same period. A widening gap between Restocker young cattle prices and Heavy steers is a concerning trend, and indicative that demand for finished cattle may not be sufficient to support further price increases in young cattle.

The Aussie dollar notched up another increase in value of 1.2% against the US greenback to reach 0.74US, bringing the total recovery in value to near 4% from the recent 10 month low of 0.7134US seen in late August.

US 90CL frozen cow prices were stable at 826¢/kg swt, with increased US prices subdued by the offsetting effect of a rising AUD. Steiner reports that imported beef availability is still limited, and packers from exporting nations such as Australia are confidently remaining steadfast on pricing, with the US experiencing a 10kt shortfall of lean beef from Australia and NZ sources at present that is not being entirely filled from alternate sources such as South America. 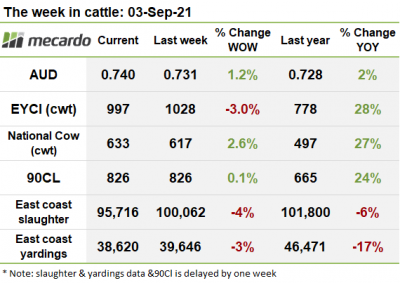 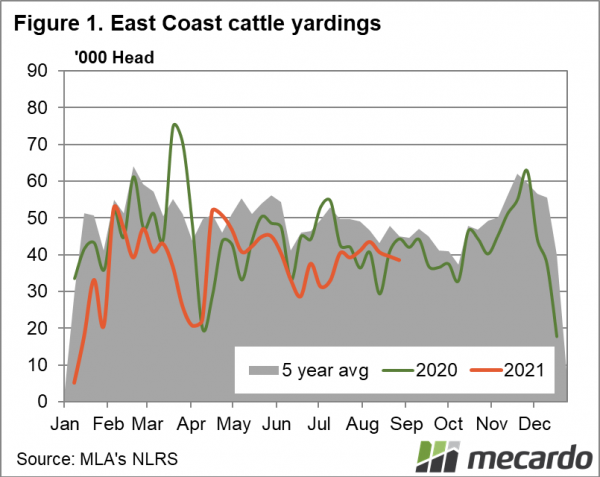 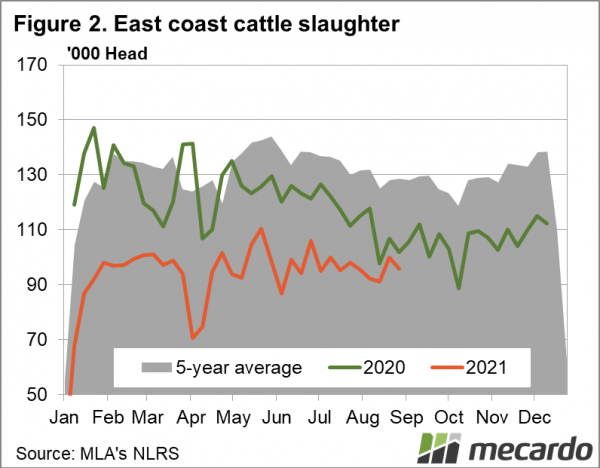 Swathes of rain in the region of 25-50mm can be expected right across NSW and VIC, with a huge 100mm torrent due in the Victorian South East. Yardings continue to drift down, supporting prices against the more uncertain slaughter trajectory for the coming weeks. The fall in the EYCI, coupled with falling heavy cattle prices suggests that more significant upward momentum in young cattle prices is looking less likely, especially since the market seems to have come off the boil in central QLD. In particular, heavy cattle prices should be carefully watched going forward for signs of further decline.