Increased cattle yarding across the eastern seaboard hasn’t slowed demand for young cattle this week but concern over export markets and the prospect of tighter margins appears to be slowing meat works appetite for finished cattle.

Figure 1 highlights the trend in weekly east coast cattle yarding levels and it shows in the last few weeks we have seen increasing numbers present at the sale yard. Weekly yarding has tipped over 60,000 head, but remains under the five-year seasonal pattern – which is understandable given the lower herd this season.

Although, it does highlight demand remains robust and this is particularly true for young cattle with rainfall encouraging restockers into the market. Pushing the Eastern Young Cattle Indicator (EYCI) just short of record highs to close at 718¢/kg cwt, 7 cents short of the all time peak. In the coming week, Mecardo will take a closer look at the restocker activity so far this season, so keep an eye out for that.

Finished cattle along the east coast has been having a good run of late. However, this week the eastern states heavy steer indicator took a pause, easing 3¢ to close at 341.75¢/kg lwt. The weekly trend in east coast cattle slaughter has dipped below the five-year trend in recent weeks highlighting the slowing processor demand in the face of high domestic prices, softening export prices and concerns around the ongoing spread of Covid19 impacting global growth and weighing on international beef markets – Figure 2.

The 90CL benchmark beef export indicator dropped back under 700¢/kg CIF over the week, pressured by ongoing concerns over Chinese beef demand due to Covid19 issues and higher NZ imported grinding beef supply into the USA. For the first time since the heady restocking episode of the 2016/17 season the EYCI moved to a premium to the 90CL – Figure 3. 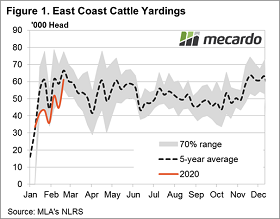 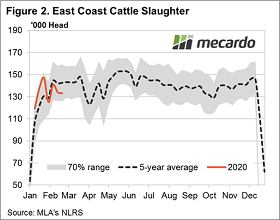 It still remains a bit of an unknown how the spread of Covid19 will play out globally particularly with regard to the impact on beef export demand, but more clarity will be available in the coming weeks as we get access to the February trade figures.

Continued rain across the continent this week, including falls of up to 25mm in western NSW will continue to buoy young cattle prices and interest in breeding stock. There’s a good chance we will see the EYCI hit new all-time highs too. However, to really extend above into the high 700 cent region or even break into $8 territory we will need to see finished cattle prices continue to probe higher too, and this will only come with robust export markets.