Home > Market analysis > EYCI closing in on a record

The rain keeps coming, and there is more on the forecast, this time for areas which have missed out to date.  The positive price response moved into its sixth week and is showing few signs of slowing.

The Eastern Young Cattle Indicator (EYCI) pushed above $7 this week to close yesterday at 701.75¢/kg cwt, over 250¢ higher than this time last season.  Figure 1 shows the EYCI is now just 24¢ off the all-time high set in October 2016.  And we’re not even in the traditional tight supply period.

Queensland is leading the charge, with restocker, feeder and trade steer indicators all within 15¢ of 400¢/kg lwt.  Over the hooks values for steers in Queensland are between 620 and 640¢, except for Cows which are at 526¢.  Only six weeks ago young cattle were making under 500¢.

NSW and Victoria are lagging somewhat in the price stakes, but are both on the rise.  With finished cattle supplies likely to tighten in the autumn, it is safe to expect most cattle indicators will move through 600¢ in the coming month.

Supply is back. Figure 2 shows cattle slaughter was last week down 8.5% on year earlier levels but was similar to 2018 levels. The much stronger prices that we are seeing now are a result of stronger export demand and booming restocker demand.

Early 2020 is the first time in over a year that east coast prices have been stronger than those in WA.  The Western Young Cattle Indicator (WYCI) rallied 24¢ this week but is well below the EYCI at 581¢/kg cwt.

Remember to listen to the Commodity Conversation podcast by Mecardo 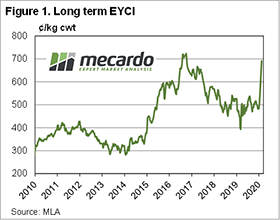 Figure 3 shows the rain is expected to ease in NSW, but large parts of inland Queensland are forecast for a drenching.  Demand for young cattle isn’t going to ease, and it is not the time of year for supply to improve, so we can expect further upside for the EYCI.

Finished cattle supplies are less variable, with record numbers in feedlots, but with female slaughter tightening sharply, processors will have to maintain strong prices to compete for supply.