Another week, another red hot record notched up in the cattle markets, with the EYCI continuing to fatten nicely, reaching yet again, an all-time record level. Both slaughter and yardings have picked up from the anaemic levels seen at the start of the year, but the market is still tight as a drum, with both measures very low in historical terms. QLD and NSW supply is particularly lacklustre, with all the enthusiasm for selling coming out of VIC and SA.

Yardings last week almost doubled on the week prior, up 86%. The lift was driven primarily driven by NSW, which saw a 74% increment in cattle offered for sale, and QLD, which recorded a huge 350% increase off a very low base. However, QLD supply is extremely tight for this time of year, with yardings at half the level of 2020, and the five-year average. NSW yardings, at 43% below 2020 levels is also displaying a distinct lack of selling enthusiasm.  VIC is quite a different story though, with supply flowing strongly, as yardings are up 54% on 2020, and on par with the 5-year average, with SA a similar story.

Slaughter lifted 6% on the week prior, mostly driven by a 27% increase in NSW throughput, with VIC and SA numbers stagnant, and QLD backtracking by 3%.

Slaughter numbers were up 5,247 head from the week prior, with total slaughter reaching 92,010 head for the week ending 22th Jan. This level of throughput is 37% below last year and 28% under the 5-year average.

The EYCI, having already reached the moon, looks like it has it’s sights on Mars next, ticking up another 1.9% to reach the auspicious level of 888¢/kg cwt. Chinese numerology considers the number 888 to have the meaning of “triple fortune” while in Christian circles, it’s connected to Jesus Christ the redeemer, so cattle markets really are blessed in many ways at the moment.

On the categories, processor steers surged forward to levels seen back in mid-November last year, while restockers and heavy steers fell back slightly. The lift in processor steer prices is probably no surprise given the tight supply conditions.

Restockers came off the boil from the heady heights reached last week, dropping 9¢ to 559¢/kg lwt, while heavy steers were a similar story, sliding 5¢ (1%) to 374¢/kg lwt.

The Aussie dollar fell back 0.5% to 0.768US, despite gloomy news about the $1.9 Trillion US stimulus package approval expected to be delayed till March. Counterbalancing this was the IMF’s 2021 US growth forecast being upgraded to 5.1%. 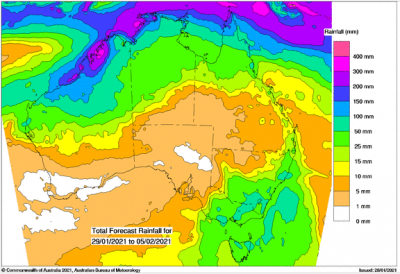 In the coming week, both VIC and southern NSW are due to receive a solid dump of 25-50mm, but at this time of year, it’s not overly positive news, as the degradation in the quality of the dry feed already on the ground in many districts will probably outweigh the benefit of any new green shoots that the rain will generate. This may result in an increased yardings in the south, but will it be enough to counterbalance the positive impact of low supply in the north?