Lamb and sheep prices were battered in a weaker market as swelling saleyard throughput took its toll. Despite the increase in saleyard supply, lamb slaughter continues to track well below seasonal expectations.

The Eastern States Trade Lamb Indicator (ESTLI) dropped 31¢ over the week to 822¢/kg cwt. The ESTLI has now fallen 8.6% in the last two weeks but still remains higher than the same time last year.  Trade lambs also came under pressure in the west, dropping 20¢ to 729¢/kg cwt.

In the eastern states it was really only Restocker lambs which managed to find some footing in this week’s market. The National Restocker Lamb Indicator lifted 8¢ to 946¢/kg cwt. Merino lamb prices fell steeply in NSW and Victoria, ending the week 73¢ and 101¢ cheaper respectively.

Heavy and light lambs also came under pressure in all eastern states. The most expensive Heavy lambs in the country are in Victoria at 834¢/kg cwt, followed by NSW at 826¢/kg cwt and cheaper again over the border in South Australlia at 787¢/kg cwt.

There was very little support for mutton in this week’s market. The National Mutton Indicator (NMI) dropped 65¢ over the week to end at 550¢/kg cwt. The NMI is now sitting 54¢ lower than the same time last year.

Last week was the first time we’ve seen lamb slaughter steady. 281,358 head of lambs were processed week which is 10% fewer than the same time last year and well below the seasonal average. Looking at the states, it’s NSW that has seen a sharp drop in the number of lambs processed. Approximately 68,000 head of lambs have been processed in NSW each week for the last two weeks which is around 35-40% less than the corresponding weeks in 2020. 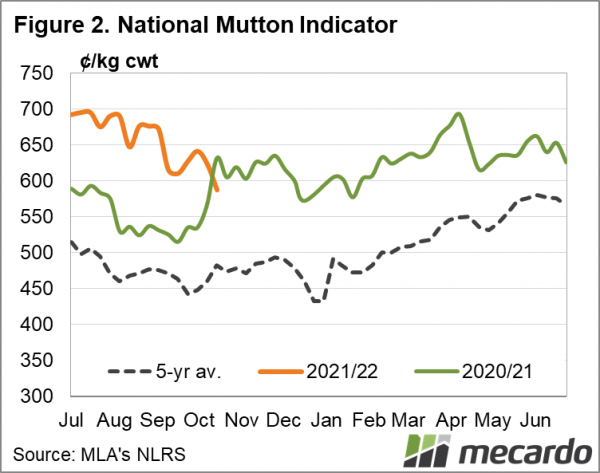 With lamb slaughter levels still well and truly lagging behind the season and yardings picking up, it looks as though the slaughter capacity just isn’t there. But as covered in this weeks analysis, with all key lamb indicators at their highest level ever for this time of year, there is still plenty of money to be made.