The combination of the recent east coast downpour, transport challenges and the upcoming Easter break has seen yardings plummet for the week ending 26th March 2021. Processor closures are also expected to impact the market in the weeks ahead.

Average weekly yarding’s for the east coast year to date are at 33,175 head, down significantly on last year’s average of 43,681.  To put it in recent historical perspective, 2018 and 2019’s average weekly yardings were both around 54,000 per week. As we can see in Figure 1 Easter disrupts normal yardings patterns. Since 2010 more often than not yardings are lower in the week following easter than the week prior.

While the EYCI hit a new record earlier in the week and there was talk of it pushing past the 900cent mark, in the end, it settled back down to 877.5¢ as of 31st March, still a historically high price – up 175¢ on this time last year. It should be noted that MLA has warned of price fluctuations in their Indicators in the coming weeks due to low yardings numbers.

In Victoria it was the opposite however, as we saw lifts in all indicators. The biggest improvement on last week came from the medium steer indicator which rose 64¢ week on week, to settle at 452¢/kg lwt. 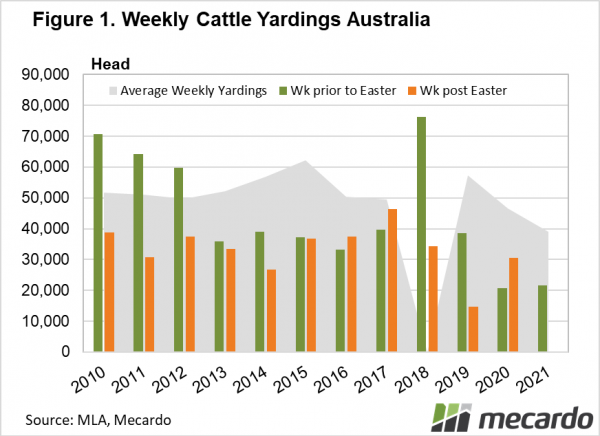 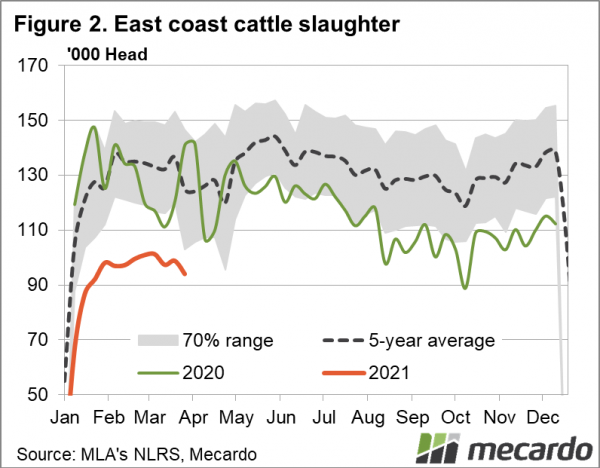 With plenty of grass in the paddocks we can expect supply to remain tight for the foreseeable future as producers take advantage of the good seasonal conditions. On top of this, the short weeks due to the Easter public holidays will constrict supply even further, supporting prices as we move into winter.