Lamb and sheep yarding and slaughter volumes entered into their Easter lull but the reduced supply was unable to provide support to prices. All MLA reported CV19 lamb and sheep indicators softened slightly, with the processor lamb category recording the biggest drop.

A reduced trading week either side of the Easter break has seen east coast sheep and lamb yarding levels decline to their usual seasonal trough dipping to 86,395 head – Figure 1. During the Easter lull in 2019 the combined lamb and sheep yarding levels were only marginally softer at 85,517 head but the distribution of lamb to sheep is quite different. Compared to last Easter the lamb yarding level this season is 8% softer while sheep yarding is 30% higher.

It is a similar picture of low supply for combined lamb and sheep slaughter too, which is unsurprising given the reduced shifts meat works are operating over the Easter holidays – Figure 2. Slaughter levels recorded 314,904 processed as a 2020 Easter trough compared to 314,242 in 2019.

However, slaughter volumes are well below the five-year average Easter pattern at around 420,000 head. Indeed, current levels are 25% below the mid-winter period when slaughter usually reaches its lowest point in the season, according to the five-year trend pattern. Given the subdued processor activity it is unsurprising to see that the CV19 processor lamb indicator eased the most this week falling 4% to close at $208 per head – Figure 3.

In some good news for producers this week the BOM released its three month climate outlook yesterday showing they are expecting a 60-75% chance of a wetter than average winter period for most of the country. Furthermore, some positive signs that the global sheepmeat export demand is recovering surfaced this week as news of an emergency shipment of 135 tonnes of sheepmeat from Victoria to the Middle East was reported. 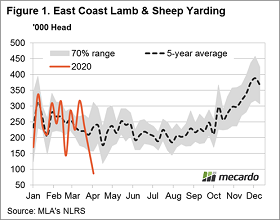 Covid19’s uncertain impact on global economic growth remains a threat to sheepmeat demand and will likely create ongoing headwinds for prices this season. However, on the plus side for producers the climate forecast is shaping up nicely for Winter and supply remains at record lows.

We probably won’t see the $9-10 per kilo carcass weight prices for trade lamb we had originally forecast for this season during Winter, but equally we are unlikely to see a price crash sub $5-6/kg cwt.