The new restrictions on meat processing in Victoria came into effect at the turn of last Friday, and the race was on to get animals through before the deadline. The solid jump in supply, was no doubt part of the reason for last weeks market whitewash. However, on the surface, this week’s market appeared more stable.

Lamb throughput was higher on the east coast for the week ending the 7th of August (Figure 1), which offset lower sheep yardings. NSW yards picked up more new season lambs, and this saw nearly an extra 15k lambs present compared to the week earlier.

The biggest lift was in Victoria, which saw a combined lamb and sheep yarding of 34,436 head. This was more than double the numbers of the week earlier and on par with the five-year weekly average levels in August.

Slaughter numbers are what we’re watching with interest. Combined east coast ovine slaughter was slightly higher than the week earlier as a 3% lift in lambs processed took up space of 12% fewer sheep. In Victoria 136,736 lambs made it to slaughter; a considerable lift on the week prior but still 10% under the five-year average for this time of year.

The Eastern States Trade Lamb Indicator lost 13¢ or 2% to 690¢/kg cwt. Heavy lambs also ended the week lower, losing another 10¢. The significant rainfall event over much of the country gave Restockers another boost of confidence, the National Restocker Lamb indicator was the best performer of the categories this week, gaining 83¢ to 716¢/kg cwt.

There was little movement in the National Mutton Indicator this week, it ended at 530¢/kg cwt on Thursday. 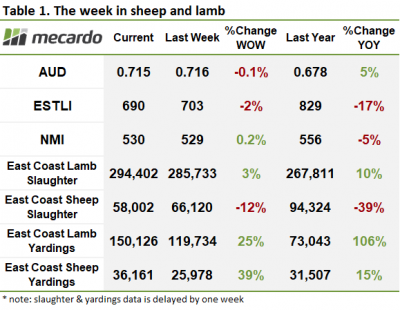 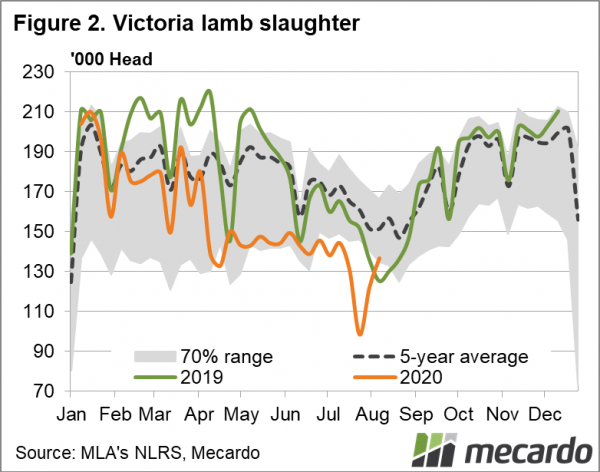 Uncertainty is the theme of lamb and sheep markets at the moment. We will all have eyes on how the new processing restrictions have impacted this week’s Victorian slaughter numbers, when they get released next week. While it may take a couple of weeks to fully adjust schedules, it will provide an indication of where capacity will sit until the end of September. With border issues still causing confusion and the announcement that JBS are closing their Brooklyn facility indefinitely, there are still many challenges for the market to adjust to.