There have been no real movements in strong export beef prices in recent weeks, but cattle prices have been on the decline in saleyards. It seem slaughter capacity might have been reached, and with processors booked up until Christmas, demand at saleyards is on the wane.

As we move into December the season definitely hasn’t improved in a lot of areas, and the cattle keep flowing.  Cattle slaughter reached a six month high a fortnight ago, and is still bumping up against four year highs.

Figure 1 shows the last time cattle slaughter was this consistently strong on the east coast was in 2015.  Interestingly, the EYCI at this time in 2015 was 600¢, showing the difference restocker demand can make.  Heavy steer and cow prices were similar to what we are seeing now, but margins for processors were much tighter.

Slaughter capacity has been up to 11% higher in the past, but processors are no doubt reluctant to invest in opening up more kill space given the declining herd.  A good rain will see supply of all cattle types tighten, and would mean processors would face the costs of closing down the extra space.

Cattle prices were down across the board last week, with declines between 10 and 30¢/kg cwt.  This might see supply tighten, and have growers waiting until the New Year. 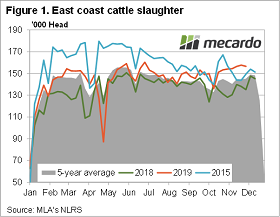 There is yet again no rain on the forecast, and the outlook remains bleak for the next three months (figure 3).  It doesn’t mean it can’t rain, but it is still more likely to be dry.  Cattle can’t keep coming forever, and it is likely we’ll see things tighten and prices steady in January.