Home > General > Another week, another record for the EYCI

The Bureau of Meteorology has officially declared La Niña is here for the summer and will persist until possibly Autumn 2022. This declaration will further encourage the herd rebuild, which is already well underway, and continue to give producers confidence in the season ahead especially in the northern regions of Australia.

The barometer for the hot cattle market is the Eastern Young Cattle Indicator and again it broke the previous record this week for the umpteenth time this year. The EYCI jumped up around 6¢ yesterday to finish the week at a record breaking 1,111.5¢/kg cwt. This time last year the EYCI was at around 800¢/kg cwt, and that was at record levels then, which shows the incredible upward trajectory it’s shown over the past few years. In 2021 so far, it’s averaged around 943¢/kg cwt, well above previous monthly averages (figure 3). Over in the west the Western Young Cattle Indicator is also sitting high at 1114¢/kg cwt.

Yardings picked up significantly on the week prior with 38,923 head of cattle yarded for the week ending 19th November, 2021 – an 18% lift on the previous week. However, this is still 29% below the same time last year and well below the 5-year average of 61,952 for the same week. The biggest lift in yardings came from Queensland & NSW, while yardings in Victoria and South Australia dropped slightly.  Over in Western Australia, there were 4,334 head of cattle yarded over last week, a slight drop on the week prior & only a couple of hundred head below the 5 year average for the state.

Slaughter levels picked up marginally last week on the East Coast, with 91,855 head of cattle slaughtered. This was 2% higher than the week prior but still 12% lower than this time last year and  over 40,000 below the 5-year average of 133,446 head. 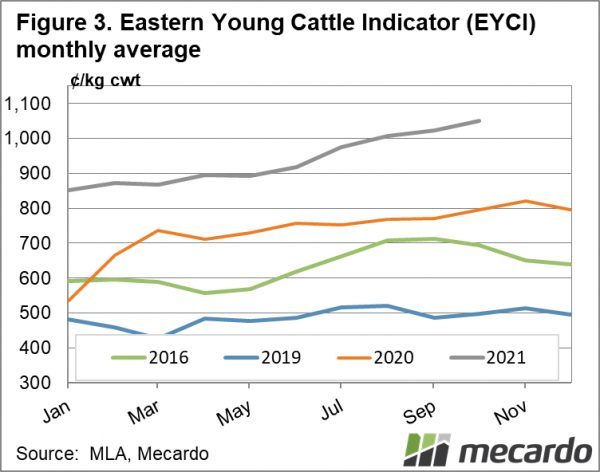 Now that the BOM has declared La Niña is here , producers will be inclined to hold onto stock for longer, which will likely keep supply tight and prices supported. As Angus Brown suggested in his article this week, we may not see a price correction until at least Autumn next year (or later), when the extra calves born this year come on the market next year.