Home > Market analysis > Another Record for the EYCI, and a rush back to the yards.

As predicted, there was a huge flurry of activity last week, with yardings rocketing skywards, and slaughter rebounding strongly. There was no sign of hesitation in the EYCI this week, again coming tantalizingly close to the 800c mark, and booking up yet another record, and restockers launched another big push upwards. The 90CL has stabilized, for now, but it probably won’t last.

After taking time out over the prior October labour day public holiday week;  producers surged back to make up lost time; with yardings increasing a whopping 41%;  lead by an astounding 90% increase from NSW, backed up by an equally impressive turnout from QLD, who delivered 40% more than the prior week. Victorians, however, were not so keen, and held back, decreasing their offering by 15%.

Overall, yardings increased 13,553 head on the prior week which saw 46,415 cattle yarded on the east coast for the week ending 16th October, 13% below last year, and the 5-year average.

Slaughter numbers lifted a healthier 23% above the prior week, ending almost a month of declines. NSW provided most of the momentum, jumping 37% in line with the increased yardings, while VIC and QLD both booked a respectable 20% increase.

A total of 108,783 cattle were processed for the week ending the 16th October- a level 28% down from the same time last year.

After faltering under mild suppression from the sudden big rush to the saleyards last week, the EYCI hit another record this week, increasing 10c (1%) to reach 799 ¢/kg cwt.

On the categories; the mood was generally upbeat, with restocker steers bouncing back strongly again, while processor steers continued their slow and steady trek upward, and the heavy steer to young cattle spread widened again, with heavy steers losing some ground.

Restockers rebounded this week by 22¢ (4.7%) to settle 484¢/kg lwt, returning to the winning streak with a vengeance. Processor steers faltered slightly, but in characteristic glacial pace, dropping 1¢ (<1%) to perch at 416¢/kg lwt. In contrast, medium cows put on an extra 8c, to close the week at 377¢/kg lwt. Volatile vealers also followed the positive trend and rose 7¢ (2%) to come to a rest at 438¢/kg lwt.

The Aussie dollar has stayed down where it was pushed last week by the expectation of RBA rate cuts, remaining relatively steady at 0.709 US. The US 90CL frozen cow price has showed some stability, lifting a brave 3¢ to finish the week at 625¢/kg swt. This, however,  may be a temporary reprieve before another tumble though, as there is still the seasonal US cow cull coming up against a backdrop of a drought, and winter’s bite setting in, prompting Americans to pack away their BBQ’s. 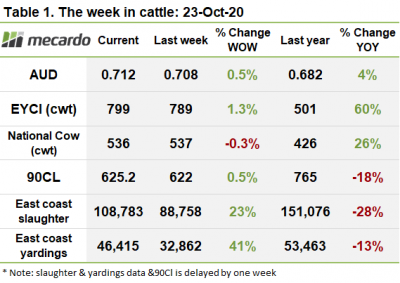 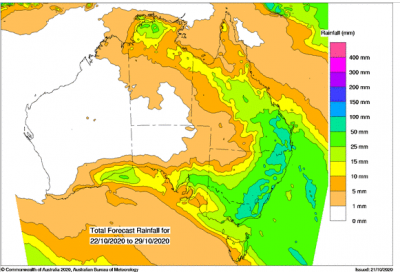 Rain, rain, glorious rain is coming all down the east coast, with even QLD receiving a generous serving this time around, with some regions tipped to be graced with over 100mm in the next week. The drenching level of moisture won’t be welcome news for those looking to harvest their crops, as it may cause delays, bogged trucks, and quality issues, but it will certainly top up the confidence of beef producers and keep up driving demand from restockers.