Producers appeared keen to get lambs to the saleyard before winter arrived, with a spike in throughput in NSW last week. Most categories of lamb in the east moved lower over the week, however, mutton managed to move higher, yet again.

Lambs were out in force at NSW saleyards. Throughput for the week ending the 28th of May in NSW jumped 57% week on week, with the number of lambs yarded 26% higher than the five-year seasonal average. This was the driver of a 33% lift in east coast lamb yardings, with 215,755 head yarded. The number of sheep yarded in the east was slightly lower than the week prior (-0.7%), as increased numbers in NSW offset a drop in South Australia.

No slaughter data is available for last week due to technical issues, so we will have to catch up on these figures once they are released.

At the time of writing this report on Friday afternoon, Meat & Livestock Australia’s weekly saleyard price indicators are also missing in action so let’s take a look at Wednesdays market instead. The Eastern States Trade Lamb Indicator was 37ȼ lower week on week to Wednesday, sitting at 806ȼ/kg cwt. In NSW, Restocker lambs were worth 905ȼ/kg cwt, up 92ȼ on the week. Merino lambs in NSW failed to gather much attention, dropping 36ȼ.

In Victoria, the market was weaker across the board, with disruptions to processing with JBS at a halt, and the state-wide lockdown. Trade lambs in Victoria lost 104ȼ on the week, while heavy lambs dropped 58ȼ.

In the West, the market was stronger again. The Western Australian Trade Lamb Indicator was 34ȼ higher in the week to Wednesday, ending at 753ȼ/kg cwt. All categories saw significant gains, with light lambs and restocker lambs most in favour, lifting 73ȼ and 70ȼ respectively.

For Mutton, demand was generally stronger, with the National Mutton Indicator lifting 18ȼ week on week to 669ȼ/kg cwt. This is just 2% higher year on year, but when converted to USD terms the NMI is at 512ȼ/kg cwt which is up 12% on the same time last year. 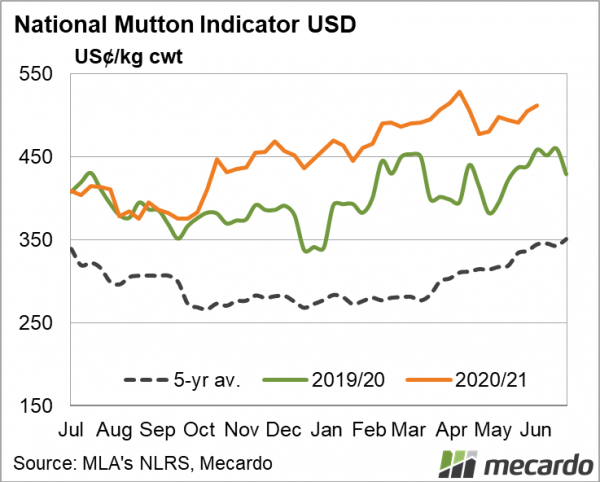 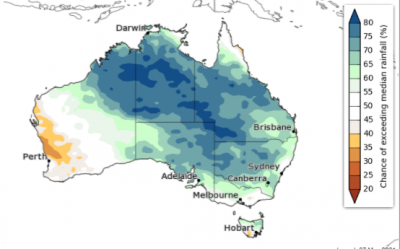 The Bureau of Meteorology have released a very wet-looking winter rainfall forecast. For most of the country, excluding parts of WA, the forecast is for at least a 50% or greater chance of exceeding median rainfall. This will add to the confidence of producers, and if delivered, another big spring lamb season will be in store.