Mutton prices broke through 700¢ on the east coast this week, an extraordinary price given the only place you find it in Australia is in some meat pies. It’s a funny coincidence that this week the announcement came of the impending ‘meat free pie’ launch.

Mutton was originally added to the recipe for the famous Four and Twenty Pie as a cheap substitute for beef, and they’ve never been able to get it out without impacting the taste.  Now it seems all the meat is gone and the taste is the same, but it’s not going to impact demand for mutton and by all reports ‘meat free meat’ is still expensive to produce.

This week the east coast mutton indicator broke through 700¢ for the first time, finishing Thursday at 717¢/kg cwt.  Mutton is above 700¢ in both NSW and Victoria, and as figure 1 shows, now more expensive than trade lambs in WA.  The rally has been extraordinary.

The Eastern States Trade Lamb Indicator (ESTLI) also moved higher after some brief respite for buyers late last week.  The ESTLI is poised to post new highs, but the appetite for higher prices from processors might be waning.

Figure 1 shows east coast lamb slaughter was down 16% on the same week last year for the week ending the 21st, while mutton was back 25%.  There is currently 100,000 head of slaughter space which was being used last year, which is now going unfulfilled.  We are probably now at the levels where processors are buying sheep and lambs to keep workers busy, as they will lose more by closing down, than killing at a loss.

The east coast restocker lamb indicator this week sat at 1056¢/kg cwt.  There is money to be made if the feed is cheap enough.  The trucks will have to start rolling from the west soon, as 45kg lambs there cost the same as a 32kg lamb on the east coast. 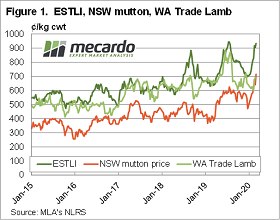 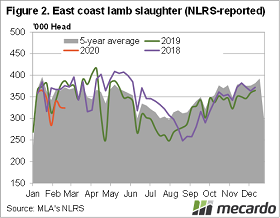 For sheep and lamb prices to fall, either supply has to lift, or demand weaken.  It is hard to see supply increasing, with any available lambs being sold into record prices.  Demand for finished lambs could weaken if a processor or two bite the bullet and cut production.  However, restockers are going to keep a floor under light lambs, which will continue to support trade lambs and flow through to the heavier end.  Restocker demand will drive mutton markets too.